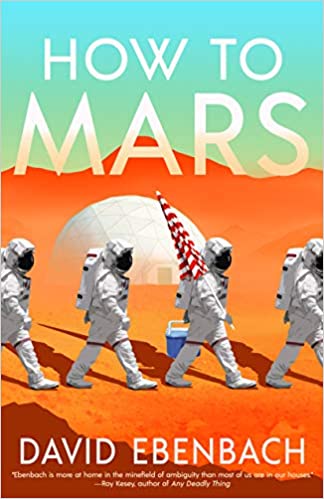 How to Mars, by David Ebenbach, was really great fun: a reality TV show about 6 people taking a one-way trip to Mars. One of them gets pregnant, even after they were all strictly forbidden from having sex, and all the men have had the snip. What happens next?

Some of it’s told in first person by the father-to-be, some of it is in report-format by Jenny, the mother-to-be. Then there are third-person sections with the resident engineer who really doesn’t like people and has started hearing voices telling him to do questionable things. But the hands-down funniest parts are told as excerpts from the unofficial Destination Mars! handbook, written by the (seriously quirky) founder of the Destination Mars! project. It has helpful snippets of advice about handling life on Mars such as:

There are also individuals who, when faced with the unknown, want to destroy it. This is probably not a good tendency to indulge.

And just when you think it’s all just a bit of fun, there are rather thoughtful, poignant passages like this one:

The truth is that we’ve never, ever been independent, in terms of our survival. Plants, animals, the sun – we’re leaning on a lot to get through the day. But we call those things natural and tell ourselves, Hey, I’m self-reliant, just living off the fat of the land. It’s a narrative that doesn’t stand up to close investigation, but it sustains us, and we would be foolish to abandon it altogether.

And there were plenty of moments while reading that I thought living on Mars really didn’t sound so bad at all. Rockets bringing you all the supplies you need every few months (except if you annoyed the producers of the reality TV show and they left out crucial things like freeze-dried ice-cream to punish you) and a much slower pace of life:

“Sure,” I eventually say. Jenny nods. It doesn’t bother her that it has taken me a while to answer. We have two speeds here: Slow and Sloooooooooooooow. Well three speeds if you count Something is on Fire, but that’s rare.

Highly recommend if you’re looking for something light, funny, quirky and just a bit different (okay, so a lot different; but good different!).