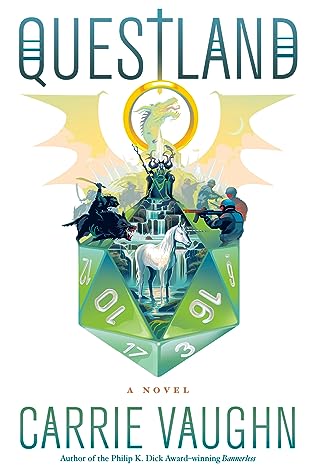 Questland by Carrie Vaughn
My rating: 5 of 5 stars

Fantasy is about what you can’t patent. Honor and heroism and… and… hope.

I really enjoyed Carrie Vaughn’s latest offering, Questland. Jurassic Park meets Game of Thrones, set on a small island in the ‘real world’ where an eccentric billionaire tried to use science and technology to bring fantasy to life. And, naturally, things went… wrong. One or more of the project leads has mutinied, taking over the island and locking everyone else out, including its founder.

There are enough eccentric billionaires in the world now that the premise of Questland is utterly plausible. I loved Vaughn’s description of Questland’s founder:

One of them was Silicon Valley tech guru Harris Lang himself, founder of Lang Analytics, inventor of a revolutionary telecom device that nobody understood, founder of a private company flinging satellites into orbit.

Lang wants control of his island back. With no expense – or manipulation – spared, he recruits skilled, armed operatives to send on the mission. Plus an expert in pop culture, to help the team navigate their way through the island’s many fantasy-themed traps and puzzles.

Told from the point of view of Dr Addie Cox, literature professor and highschool shooting survivor, she doesn’t bother to explain the tech in detail. Instead, she focuses on the wonder.

As a reader, visiting Questland with Addie feels like stepping into a movie set. But instead of CGI unicorns there are cyborg unicorns. And instead of robotic giant spiders controlled off-set, they’re A.I. And they don’t have inbuilt safety protocols.

There are so many wonderful moments in the novel, from passing references to childhood favourites, to meditations on the meaning of life.

On finding a cupboard portal:

He pushed aside the rack of coats and gestured me back through the wardrobe.

“You know, Mr Tumnus would have had tea for me,” I said.

Questland is great escapism, partly because escapism is what it’s all about – an island where the D&D game never ends, and the GM (game master) always ensures there’s structure, logic and an identifiable solution. As Addie says:

All I’d ever wanted to do was escape. No, that wasn’t true. All I wanted was for what happened to mean something. Stories meant something, and real life… didn’t. God has a plan, this is part of God’s plan – stupid people kept telling me that over and over again at Alex’s and Dora’s funerals, at the endless memorials. There was no plan. Or if there was, it was cruel, and God was a terrible GM.