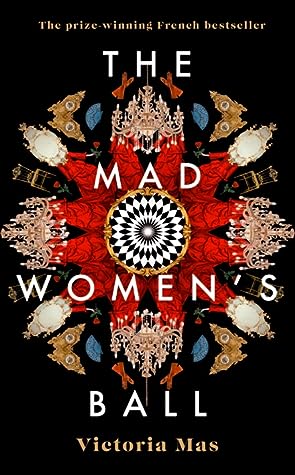 The Mad Women’s Ball by Victoria Mas
My rating: 4 of 5 stars

The Mad Women’s Ball was an interesting read. Touching on dark themes using beautiful language and a muted tone, it follows a few short weeks in the lives of several women committed to the infamous (and real) Salpetriere in 1885 in the lead up to the annual ball.

The concept of the ball itself is disturbing enough – each year 400 physically and/or mentally ill women are dressed up and presented to the Paris (male) elite to gawk at.

But when Eugenie arrives at the asylum, committed by her father for claiming to speak with the dead, the asylum’s delicate balance is disrupted.

The Mad Women’s Ball is similar in theme and setting to Greer Macallister’s 2019 novel, “Woman 99″, except that Macallister’s novel was set in an asylum in London (rather than Paris), it was a sister (rather than a brother) trying to liberate the woman and there were no paranormal elements.

Asylums were horrific places to be in the nineteenth century. Women’s asylums were commonly places where girls and women who didn’t behave as men wanted them to were locked up.

Some women were genuinely too ill to be cared for elsewhere at the time – in catatonic states, severely mentally ill or with epilepsy (which was little understood in 1885).

Others, however, were incarcerated for decades for simply reacting to their circumstances.

Beautiful Louise was committed at age 13 after her uncle raped her. Displaying clear signs of what we would today consider PTSD, she’s instead been locked up for 3 years and hypnotised regularly for the entertainment/”education” of medical interns.

Therese was committed after pushing her unfaithful lover into the Seine. This was the same lover who forced her into prostitution for 10 years. She was beaten regularly by her customers, then by her lover/pimp if she didn’t bring enough money back home.

Though by no means insane, Therese found a certain peace in the asylum. She felt safer there than she ever did outside the asylum.

Largely unable to seek financial independence, and valued only for what they can do for men outside of the asylum, it’s truly an indictment on society when women feel safer and more at peace in an institution.

Out now in hardcover, ebook and audiobook.